This was originally posted on November 24, 2010 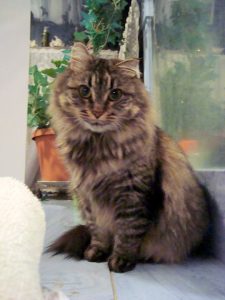 Yesterday at about 2:30pm I received a voicemail from a woman named Deb. She said that we’d emailed way back when I first lost Suki. She spends a lot of time on Craigslist trying to match up lost cats with found cats. She also does some fostering for a rescue group called Animal Angels. At that time I got dozens of nice emails and phone calls from wonderful folks trying to help me get Suki back.

She told me that she had found Suki. She had been looking on Craiglist for a different cat and saw an ad for woman who was trying to rehome two cats. She recognized one of them as Suki. She contacted the woman who had her and they discussed the cat and Deb was positive it was Suki. She gave me her number to call her back. I was about to call her when I got another call from an unrecognized phone number.

It was Kate, the woman who had the cat. She said, “Are you the one who’s missing Suki? Well, I have her!” I’ve had people think they have found her in the past, so I was cautiously optimistic, but she offered to bring the cat over in the evening.

I was so nervous waiting that I couldn’t even eat dinner (and when I can’t eat, you know something’s weird). Kate showed up around 6:30 with the cat. I looked at her and said, “Are you my Suki?”

We sat with her for a little bit trying to determine if it was Suki or not, but everything was telling me it was her. She’d just been very well fed (read: she’s now fat) so I wasn’t 100% sure at first.

Kate told us all that she knew about Suki. Here’s the readers digest version:
She was found in Uptown (she’s not sure exactly where) by Kate’s friend. It was raining and the friend was standing under an umbrella. Suki came up to her and snuggled up to her feet, under the umbrella. I guess it never occurred to her that Suki might already have an owner; or if she did, she didn’t care. So the woman took her home and named her Karma. She kept her for a few months then had to give her up. She gave her to Kate. This was around Halloween of 2009.

Suki/Karma had been living with Kate and her roommates since then. They acquired another cat who is sorta naughty (mostly shredding carpet) and the landlord asked Kate get rid of the cats. So she placed an ad on CL.

That’s when Deb came to the rescue (literally!). She saw the post, remembered Suki, directed Kate to Suki’s website (http://suki.ecalos.com) and Kate knew right away it was the same cat. She called me and we discussed Suki’s strange habits and mannerisms and we were pretty sure.

Kate was happy that Suki found her family, but I could tell she was a little sad about leaving her. She said goodbye a few times and still had some trouble leaving. It was sweet. I gave her Suki’s reward money, which was still in an envelope in it’s hiding place since August of 2009. She was hesitant but we insisted.

I had so many visions of awful things happening to Suki while she was gone, I’m very happy to know that Suki was treated so well and loved.

We’re bringing her to the vet on Friday for a tune-up and to check her chip and make sure. Though if the chip reads anything other than she’s mine, I’m going to assume there are two chips, because this is my cat. I know it.*

My Note from the Universe yesterday was this:

You are among friends, Amy.

If you only knew, Amy, how deeply connected you are to everyone now on earth, you’d probably faint.

Life is good,
The Universe 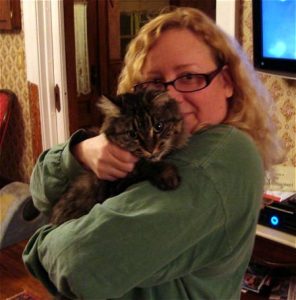 *Update: it’s totally her. Chip matched. But even before that, I knew. When I went to feed her the following morning as soon as I grabbed the food off the shelf she ran straight to the spot where she always ate. Unfortunately, Albert now eats there, so we had to make some modifications. 🙂