You thought I forgot to make the May Bon Appetit meal, didn’t you?

If you’re new here, I am currently working on a project where I make one meal per month from that month’s issue of Bon Appetit. I started this in January, if you want to go back to the beginning, here you go!

This month I chose the Chana Masala. I love Indian food, but I’m never really great at making it. It turns out good, but it’s never as good as restaurants’ Indian food. So I wanted to try this. 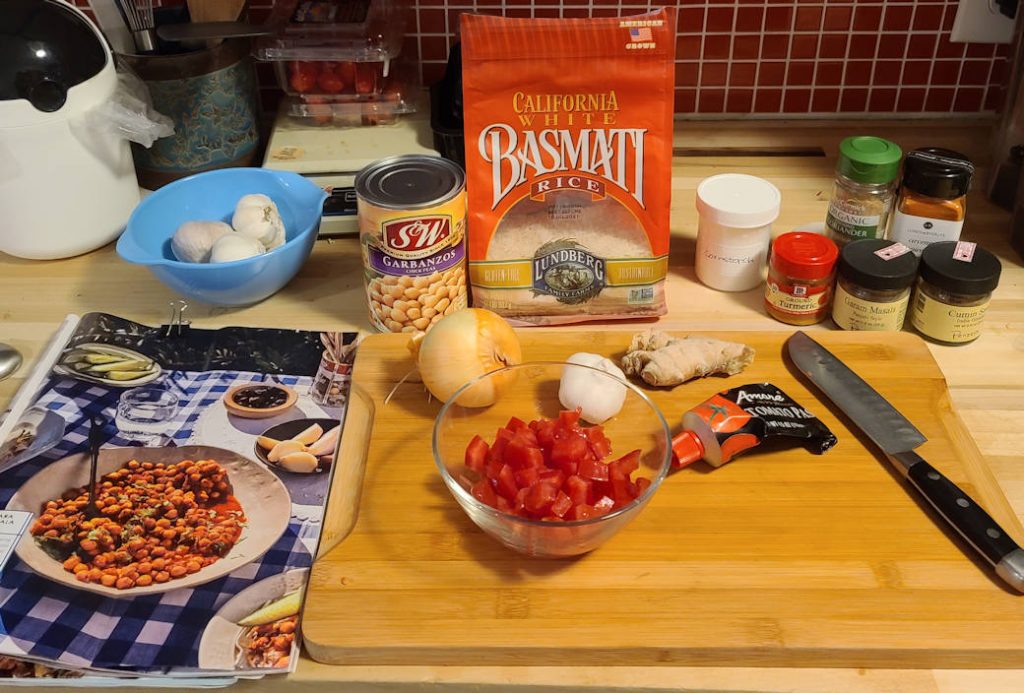 I made this May 27, 2021 for lunch. It was super easy, and tasty. However, I might have used too much cayenne. It was really hot! I halved the recipe since I only had one can of chickpeas and I knew I didn’t need 4 servings. I’m the only one who likes vegetarian dishes in this household. 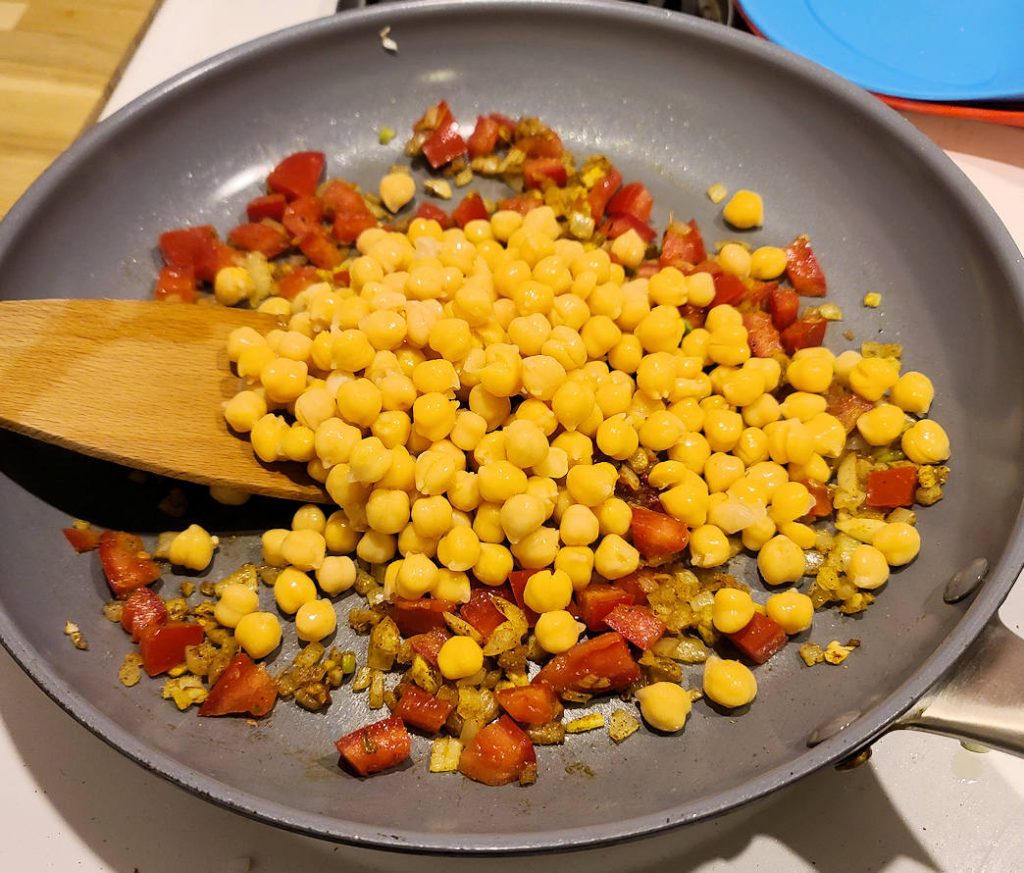 I didn’t have the coriander and cumin in seed form, just ground, so I skipped the step where you toast the seeds and then grind them. I hope the spices were toasted before ground and packaged. But even if they weren’t, it had great flavor.

So other than that, I followed the recipe except I added spinach at the end for some color and vitamins. Here’s where I went rouge and added spinach.

I don’t know why it’s not as dark as the photo. It started out pretty dark but by the time it was done it was pretty yellow. 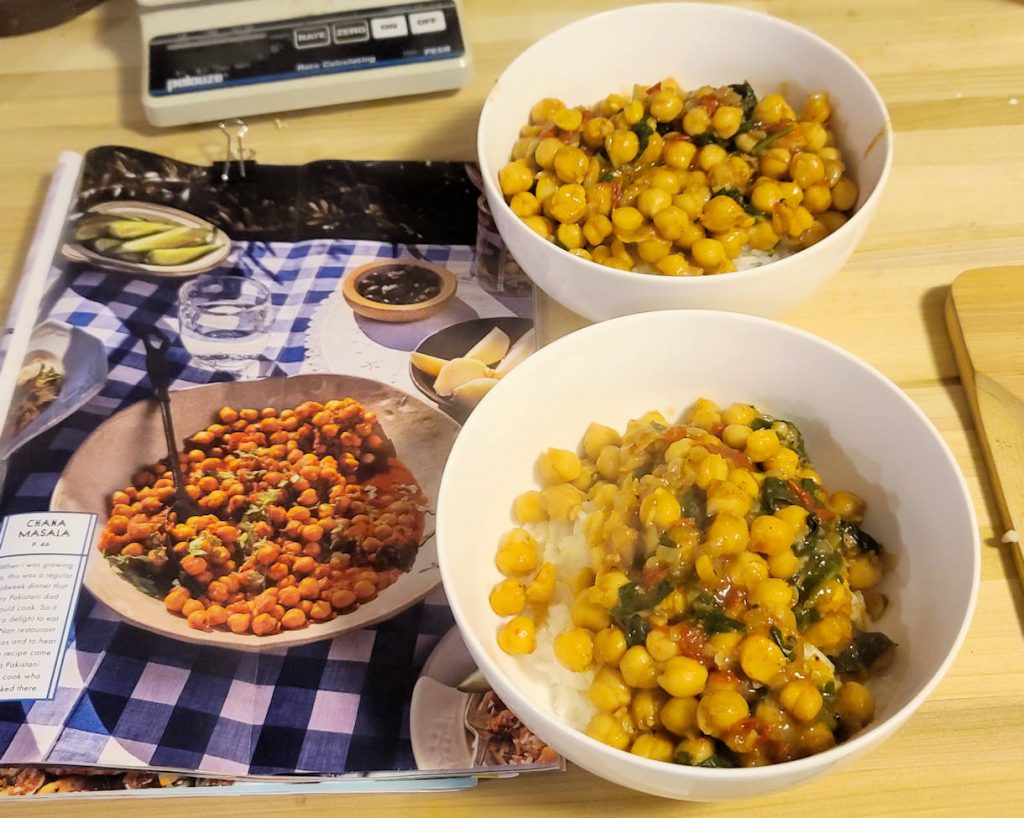 Different lighting. Still not as dark as the photo. 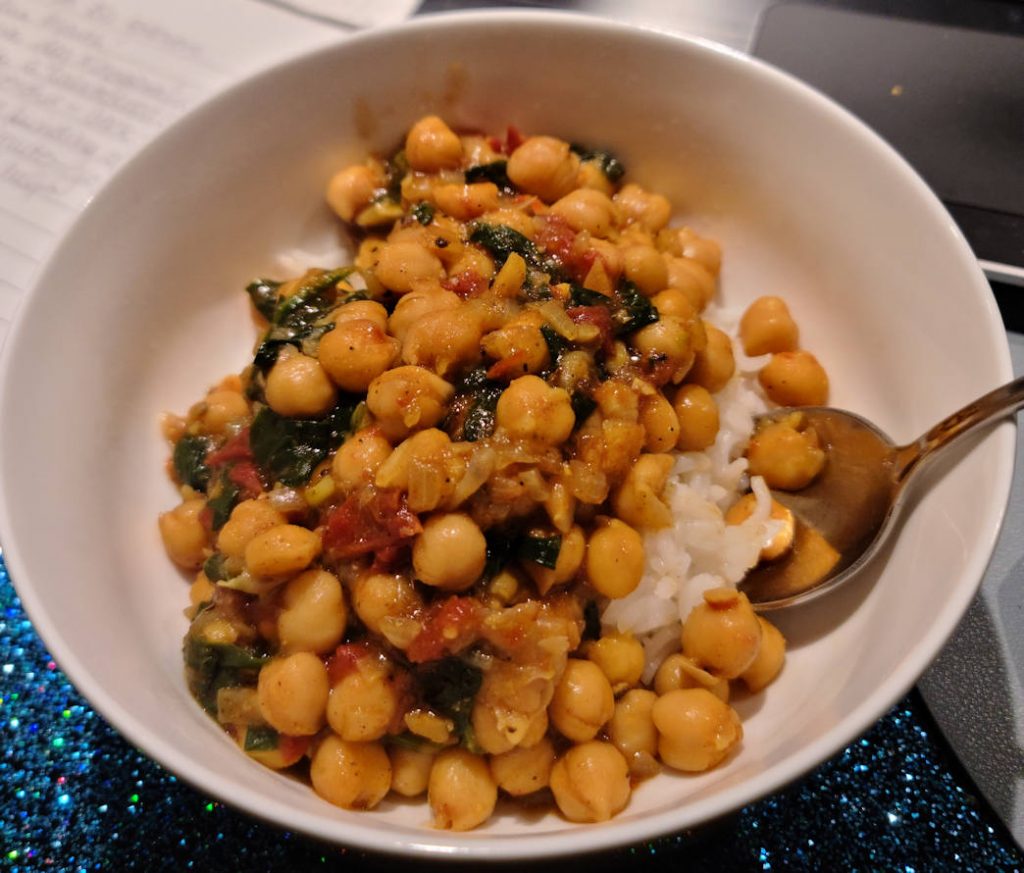 The garlic, onion, tomatoes, ginger, and maybe the rice (I’m not sure) were all from Imperfect Foods. Use my link and get $10 off your first box. Full disclosure, I get $10 too.

So the one I chose from the February issue of Bon Appetit was the Broccoli Soup With Turmeric, Peanuts, and Crispy Shallots

I was taken by that beautiful photo! Kudos to the photographer and food stylists.

One of the “rules” of this project was that I really wanted to follow the recipe exactly and that I would not substitute any ingredients.

This is harder for me than I thought it would be. Not because I can’t follow directions, but because I just don’t always have everything on hand (or I don’t want to buy a bunch of something and waste the rest).

The first issue is that this recipe was for 4 servings and I was making this for myself (the husband doesn’t like soup or vegetarian dishes so this was a nope on both aspects).

So I scaled the recipe in half.

Then I realized I didn’t have serrano, but it did say “or other green chile” and I did have jalapeno so I used that and I think that’s acceptable.

I didn’t have a big Yukon gold potato and even if I did I probably wouldn’t use it because what am I doing to do with half a potato, since I’m halfing the recipe? So I used a bunch of small potatoes.

The only other change I made was that I didn’t have cilantro or mint for a garnish.

Here’s my set up:

So the changes I made were really miniscule and I think would be allowed by the recipe author. Right? Please?

Oh and because I was making this in the bar kitchen, I didn’t have a large soup pot so I made it in the instant pot, but I didn’t pressure cook it. I just used it on Sauté Mode.

This was putzy to be sure, but pretty easy to make. It was sort of a lot of chopping, but I don’t mind chopping. As long as I have a good knife.

I used the immersion blender, right in the pot instead of a blender.

The part where I almost said “F this” and did it my own way was at the very beginning. The recipe says to cook the shallots, peanut and turmeric in the oil, separate them (drain the shallots and keep the oil). Then for reasons I can’t fathom, it says to mix them back together.

Well, that’s just ridiculous. So I compromised. I made the oil as told, then I separated them, but I kept them separate (don’t tell me how to live my life!) I’m glad I did. Because of that oil? It was amazing!! I would make that again and use it to drizzle over everything!

I’m not sure why the recipe doesn’t say to just cook the vegetables (step 3) in the oil you just made. It says to use regular oil. Why?

The end result was a good soup. Good, not fantastic. I happily ate my lunch, I also added a slice of toasted bread (we call that toast, Amy). But I never ate the leftovers. I planned to, but each time I saw it in the fridge I went, “ehhhh…” and chose something else. So I guess I didn’t like it that much.

But it sure is pretty!

Tofu with Rice and Miso-Maple Dressing

I decided this around January 25th, 2021. Because apparently I thrive on self-imposed deadlines.

So I grabbed the January issue of Bon Appetit and looked at each recipe to see which one I would make. First of all, that issue doesn’t have very many recipes. It’s all story. Which is cool, cool stories….but I needed recipes to choose from!

Part of the parameters of this are that I will FOLLOW the recipe exactly or as best I can. So I had to pick something that I already had all the ingredients for on hand.

I’m not kidding when I say the ONLY recipe in this issue that met those criteria is this one.

Tofu with Rice and Miso-Maple Dressing

The marinade for the tofu was delicious, and as it turns out, it also basically the dressing (minus the cornstarch).

I loved the fresh flavors of this. I followed the directions nearly exactly (the only thing I didn’t do is grate the garlic because I couldn’t find the grater. I just chopped it really fine).

The only things I would change are…

I’ll make this again. It reminded me of the Yum Yum Rice Bowls from World Street Kitchen!

The carrots were from Imperfect Foods. Use my link and get $10 off your first box. (Full disclosure, I get $10 off too.)

I made the Zucchini & ’Shroom Hibachi Bowls with Scallion Rice & Spicy Special Sauce from EveryPlate for Meatless Monday!

Not to mislead you with that exclamation point, It was ‘meh’. This had almost no flavor. Nowhere near worth the 840 calories it supposedly has. Where are all those calories? This was boring boring boring. The carrot mixture had no flavor despite having 3 packets of soy sauce. It needed something else, desperately. Garlic? 5-spice? Sesame oil? Anything!

The mushrooms were good, but that’s likely due to the pat of butter that you put on them after they’ve cooked. I even added the leftover fry seasoning to the rice before plating, and added some salt. But still, it was bland.

Oh and it uses three pans so clean up was a pain too. Also a little miffed that I have to provide so much of my own ingredients. How hard would it have been to include a packet of ketchup, pack of sugar, a couple of pats of butter, and 2 eggs?  We all expect to provide our own oil, salt and pepper, but the other stuff?

I will not make this one again, nor would I recommend ordering it. All the time I was eating it I was thinking, ‘well at least it’s healthy’. It’s not.

I will leave on a positive note…the mayo sauce was good. It was mayo, sriracha, ketchup, sugar (I only used a tiny bit–there’s sugar in ketchup already), and this mysterious “fry seasoning” (it tasted a little like Cajun spice).

At least it was pretty!

Every Plate – honestly, they have some really great meals! So if you want to give it a try use my link for a free box.

I made this amazing dish back in March 2020, when we thought this virus nonsense would last 6 months, tops. Oh, how silly we were. (note I don’t mean thought the virus *was* nonsense, we all know it’s real and deadly).

I made it with the naan, both of these recipes are from Half-Baked Harvest.

Well it was delicious and easy. Mine isn’t as pretty as hers, but hot damn, it was good.

Next day, for the leftovers, I added some more milk and blended it into a soup. So yummy!!!

Sweet Potato with Broccoli Cheese. Sometimes I want a vegetarian lunch. Then I go and make it unhealthy with cheese sauce.

This is my recipe so I can share the whole thing here. Note, I had some difficulty here. Suggestions for cooking that damn potato are welcome!

Here’s what I did:

Rinsed off the sweet potato and pricked all over with a fork.

Placed the wire insert in the pot so that the potato isn’t touching the water. Poured in a cup of water.

Placed the cut broccoli in a steamer basket and sprinkled with a little salt. Placed it on the potato.

This is where I need help…I cooked it on high for 6 minutes. The broccoli was done but the potato was nowhere near done.

While that stupid potato was “cooking” I made the cheese sauce.

Melted the butter, added the flour, whisked until no lumps. Added the milk, kept whisking until the sauce was all incorporated.

Broke up the cheese and dropped into the sauce. Stirred until it was combined.

It would normally be done at this point,  but because of the potato debacle, I had to take it off the heat and reheat it with the now cold broccoli.

Scooped out the potato guts and place in bowl, mash up a little. Add the broccoli cheese sauce.

Notes:  Made this October 2, 2020. Once that freaking potato cooked, it was delicious. I made it again a few days later, using a slice of yellow Kraft American cheese and it was also very good.

Sweet potato, broccoli, butter, and almond milk all from Imperfect Foods. Use my link and get $10 off your first box. Full disclosure, I get $10 too.

I made this Stovetop Mushroom Lasagna October 22, 2020. It’s from Bon Appetit, November 2020 issue. I saw the photos and was sold. Then a few days later I got both mushrooms and lasagna noodles from Imperfect Foods. So it was meant to be.

While I was making this I thought the 2+ cups of milk seemed like a lot, especially because it also called for water. I read the recipe several times because I could not believe that water was included. So I only used two cups milk then I added just enough water at the end, before simmering in order to submerge the noodles.

I noticed later that while the water was in the recipe directions, it is *not* in the list of ingredients. So I think this is an error.

Also, I didn’t have whole milk so I used unsweetened almond milk. Greg noticed and thought I’d added nutmeg! So eww, don’t do that! I thought it tasted OK but I’m sure it’s better with whole milk. Also that would have thickened it better.

In an attempt to thicken it, I added a bunch of shredded mozzarella before putting it in the oven to brown because what is lasagna if it doesn’t have CHEESE?!

I also added some umami seasoning to it at that time because it was bland.

The end result was delicious and I’d make it again for sure, but use whole milk and no water. I see everyone else on the BA site said it’s too soupy and bland too. But using less liquid and some extra seasonings make it really yummy!

The lasagna noodles, mushrooms, almond milk were from Imperfect Foods. Click here to get $10 off your first box (and full disclosure, I get $10 too!)